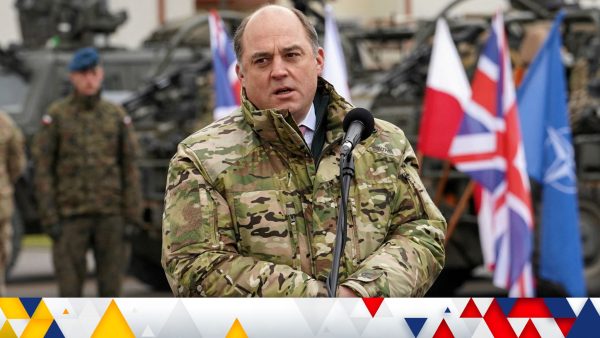 Ben Wallace has reinforced Liz Truss’ view that Russian forces must be pushed out of “the whole of Ukraine” – and suggested this should include Crimea.

Speaking at an event at Mansion House on Wednesday evening, Foreign Secretary Liz Truss said Western allies, including the UK, must “double down” and “keep going further and faster” to “push Russia out of the whole of Ukraine“.

Asked on Sky News if Ms Truss was referring to Crimea, which was invaded and annexed by Russia back in 2014, Defence Secretary Ben Wallace replied: “Well, the international community believes Russia should leave Ukraine.

“The international community has condemned Russia for its invasion of Crimea, which was illegal in 2014. Its invasion of Donetsk, recognising it is illegal, is somewhat different.

“We don’t recognise it and we’ve constantly said that Russia should leave sovereign territory. So that hasn’t changed.”

Pressed on how far the West will support Ukraine in expelling Russian forces, Mr Wallace added that there is a “long way to go” before there is the prospect of Ukraine taking back control of Crimea.

“There’s a long way to go before Ukraine pushes into Crimea,” he told Sky News.

“I think what I would certainly say is, we are supporting Ukraine’s sovereign integrity. We’ve done that all along. That, of course, includes Crimea.

“But you know, first and foremost, let’s get Russia out of where they are now in its invasion plans and help Ukraine resolve and actually remember the Minsk agreement, which Russia has basically ripped up, was all about trying to resolve those two occupied territories.

“But the key thing is to continue to support Ukraine’s sovereign integrity and their ability to defend themselves”.

Both Ms Truss and Mr Wallace’s remarks imply that the UK government believes Russian forces must leave not just the territory occupied since the current invasion at the end of February, but also areas they occupied and annexed previously including Crimea and parts of the eastern Donbas region.

Truss: China must ‘play by the rules’

In her speech on Wednesday evening, the foreign secretary also singled out China for its silence on the war in Ukraine, warning the country to “play by the rules”.

China voted to keep Russia as a member of the United Nations Human Rights Council earlier this month and previously abstained from a Security Council vote condemning the invasion at the outset of the conflict.

“China is not impervious. They will not continue to rise if they do not play by the rules,” Ms Truss said.

“China needs trade with the G7. We represent around half of the global economy. And we have choices.

“We have shown with Russia the kind of choices that we’re prepared to make when international rules are violated.”

Addressing the UK’s allies in the keynote foreign policy speech, the foreign secretary also declared that the war in Ukraine “is everyone’s war because Ukraine’s victory is a strategic imperative for all of us”.

Her speech came after a 63rd day of fighting, which saw Kherson particularly badly hit.

At one point, Russian television channels were knocked off-air following a series of explosions in the southern city which has been occupied by Russian troops since early in the war.

In key developments:
o UN Secretary-General Antonio Guterres arrives in Ukrainian capital Kyiv ahead of talks with President Volodymyr Zelenskyy
o Russian missiles have struck an arms depot housing weapons from the US and European countries, Moscow has claimed
o The commander holed up inside Mariupol’s Azovstal steel works calls for a Dunkirk-style evacuation, saying the situation there is dire
o The frontline Ukrainian city of Severodonetsk has become a key target for Russian forces
o The UK has now sent more than 5,000 anti-tank missiles to Ukraine – MoD
o Russia expels eight Japanese and three Norwegian diplomats
o Russia cut off natural gas to NATO members Poland and Bulgaria – and threatened to do the same to other countries

Putin: Goals of Ukraine military operation will be achieved

Meanwhile, President Vladimir Putin warned of “lightning fast” retaliation against any country that interferes in the conflict.

In an address to the Council of Legislators in St Petersburg, the Russian leader said “all the objectives will definitely be carried out” in the Ukraine war.

He said: “If someone intends to interfere in what is going on from the outside they must know that constitutes an unacceptable strategic threat to Russia.

“They must know that our response to counter-strikes will be lightning-fast.”

He also vowed the goals of his military operation in Ukraine will be achieved.

Read more: The city that’s been attacked since day one

There are growing concerns for some 100,000 civilians still living in the besieged city of Mariupol.

Following a meeting between UN Secretary-General Antonio Guterres and President Putin it has been agreed in principle that the United Nations and the International Committee of the Red Cross should be involved in the evacuation of civilians from a besieged steel plant in the southeastern city.

Stop Comparing the Holocaust to Other Events, Israeli Leader Urges